Here is a very rare car – One of two Alfetta GTS models left in the world!

It’s a RHD car but has spent nearly all it’s 40 year life in Tuscany with its ONE OWNER!

The Alfetta GTS was a UK only special edition model. It was only built in 1979/80 and it is estimated between 25 and 50 were ever manufactured.

The GTS is the last year of the Alfettas with stainless steel bumpers/window trim before the 1980 restyle when ugly plastic safety bumpers and trim were added.

There were around 17,000 Alfetta GT 1.6’s, produced worldwide. But only a handful of special editions such as the GTS, GTV Strada, GTV 8 2.6, and GT America were ever made. Most experts have never heard of the GTS but it is a legitimate model and I have an original brochure that will be included with the sale. From the email correspondence I have with experts on the Alfa forums and Owner’s Club, it is estimated there were only between 25-50 Alfetta GTS cars made. According to HowManyLeft, and the Alfa forums, this is believed to be ONE OF JUST TWO GTS examples left in the world. (The other GTS has its own website. I have been in contact with the owner who confirms this is one of two cars left.)

Yes, incredibly this is a one-owner car.

It was purchased in the UK by an Italian gentleman who after a few years of ownership, relocated back to Tuscany where his Alfetta has spent its life in a hot, dry climate. During its pampered existence, it was only used at weekends and special occasions and has therefore a low mileage of 69,000 miles. It was always garaged and has been regularly waxoyled since new, hence why there is zero rust or signs of repair on this car. Several years ago, a change in the Italian laws meant that the Alfetta could not be used on the Italian roads unless the car was reregistered in Italy on Italian plates. The owner wanted to keep the originality of the car and did not want to change the registration so it remained off the roads in Italy for several years, before it was sold to an importer who brought back to the UK in 2017.

I purchased the car from the importer in August 2017, but I have been in contact and met with the Italian gentleman who owned the car. I have spent over a year now recommissioning and restoring the Alfetta. As you can see, it is the cover car on my website Autocollezione.co.uk and also on my business cards etc. I was going to keep the car as I’d actually been searching for a good, red Alfetta for 10 years or more. But I have more projects on the go so it is now for sale.

Originally, I wasn’t going to have it resprayed as the bodywork was in good condition with only a few small blemishes…

So I started with the interior – The carpets and seat fabric had bleached by the Tuscany sun so I removed the interior, redyed the carpets black, recoloured the door cars, and refurbished the plastics where required, replaced some vinyl and any old screws with nice new ones. I spent weeks trying to source the original ochre velour fabric from all over the world and had the seats professionally recovered in as close to OEM fabric as I could source. My upholster has done a superb job.

My auto electrician got the ServoGlide electric windows working and repaired a few small items for the MOT. (The car will come with a new MOT and is MOT/tax exempt next year.) The radio has been replaced with a new digital Alpine radio/CD with removal face.

Wheels – The original silver steel wheels were in good condition and has been refurbished at some point. I acquired new beauty trim rings and Alfa chrome wheel nuts. I machine polished the stainless steel centre caps. The wheels ride on as-new Pirelli 3000 tyres. Brakes have been rebuilt with new seals, pistons, etc. Two callipers replaced.

Bumpers – I removed them, sanded them with p180 to p3000 grit papers and machine polished them so they have a mirror finish. Black centre tapes replaced with new. Rivets new. Back of bumpers I painted satin black.

Lights & Glass – The fog lights on the car were non-original so I replaced with new NOS Hella items that I managed to acquire after searching for months online. I believe all the glass is original.

Roof – The previous owner informed me the Webasto sunroof was damaged in the past and rather than repair it he had the hole professionally blanked over with a bespoke panel which is covered in black vinyl on the outside and cream on the inside. So it looks like the original sunroof but doesn’t leak.

Graphics – I had new graphics made up from scanning the original brochure and having vector files made, and then new vinyl graphics. The side impact rubbers were not on the car when I got it so I sourced some very similar from the USA which are good quality with 3M backing tape.

Paint – When I got the car it still had its original paint. I wasn’t going to get it resprayed as it was still acceptable with only a few small marks, blisters and some paint fade, but after I had restored the interior it looked so good that the exterior warranted a respray.

All the panels are original and all the wheel arches have nice sharp metal edges, ie no filler, all the way around. It’s never had corrossion problems or been in an accident. The only area of rust was above the rear bumper where I believe water probably got in through the rear light seals as these were shot (I’ve now replaced with new seals), water sat inside the crease line and rusted outwards. This had been crudely repaired with filler in the past but my paint shop cut all this out and welded in metal in its place.

Underneath – The underneath is very original and the chassis and suspension components have been regularly waxoyled and undersealed. Other than a one inch area that required welding on the driver’s floor well for the MOT, and a 10p size hole behind the inner sill, there is no other rust or previous signs of repair. I replaced a couple of bushes for the MOT. Two brake callipers are new and the other two were rebuilt with new seals, pistons, etc.

Engine – All original. I’ve given it a full service with new oil, filters, brake fluid, coolant.

Drive – The car drives and sounds great, like only a classic Alfa can! There is good oil pressure, no smoke/over heating/funny noises or knocks, none of that. It starts first time. The battery is new. The 1.6 sounds nice and throaty and has enough usable power to have fun driving round the B roads, getting lots of waves and attention as it goes!

The car comes with a GTS brochure, a Haynes manual, the original owners manual, original tool kit in case, two sets of original keys, and a waterproof car cover. There are two boxes full of spares – The owner has kept virtually every part which has been replaced, down to old door rubbers, badges, wiper blades and even valve caps! There are extra headlights, chrome mirrors, door handles, cooling fan, alternator, wooden steering wheel, interior plastics, badges, etc. probably worth several hundred pounds. There are many receipts with the car but the owner told me a lot of work was done cash in hand to avoid tax, as is the Italian way! I have kept the original upholstery fabric too.

Alfetta GT’s have been going up in value around 20% per year since 2012 and with the rarity of this GTS (one of 2 left in the world), it is certain to be a very sound investment and very collectible. 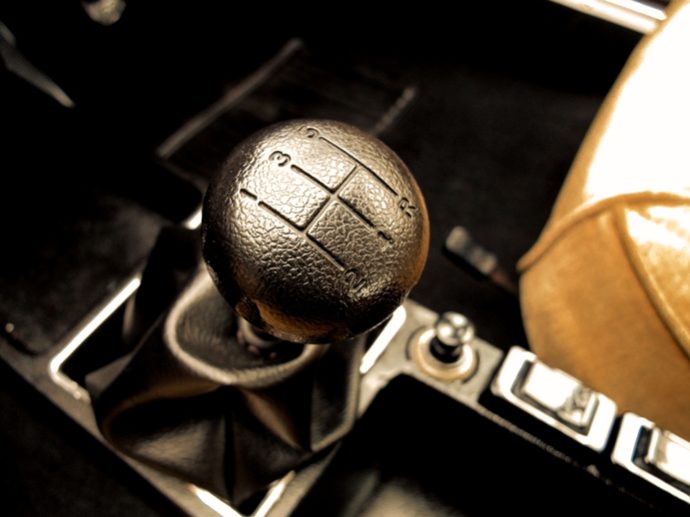 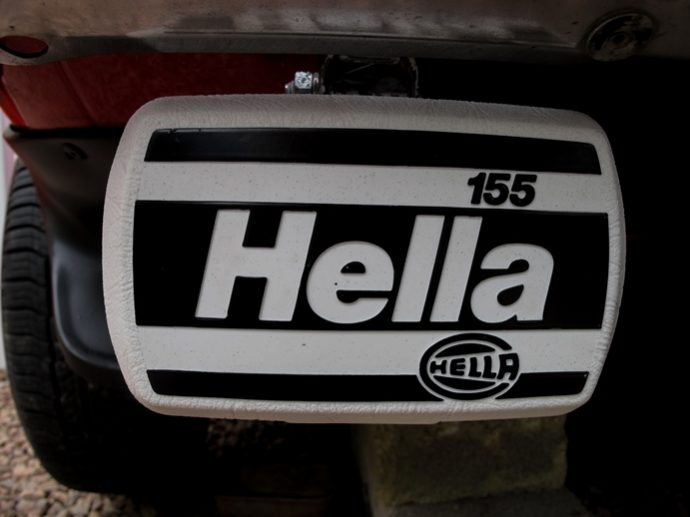 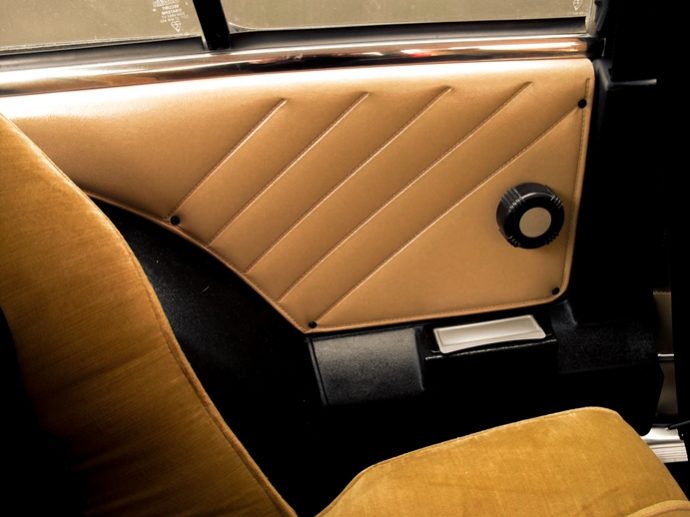 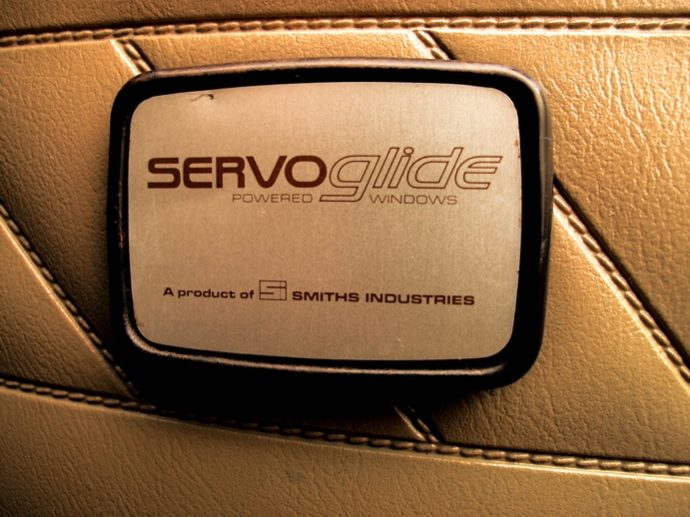 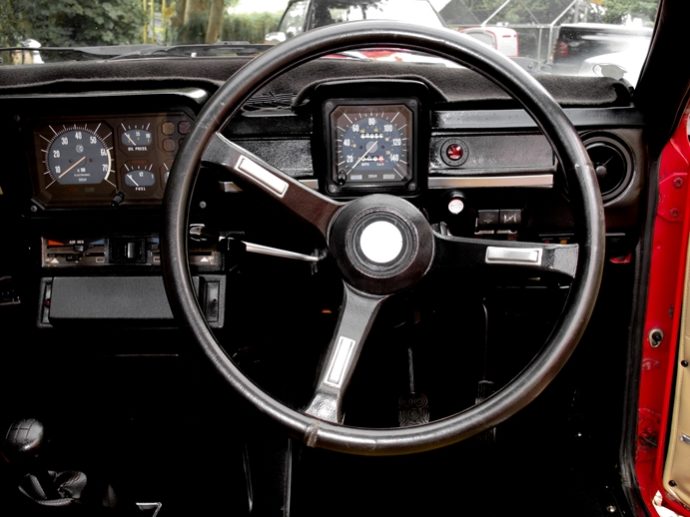 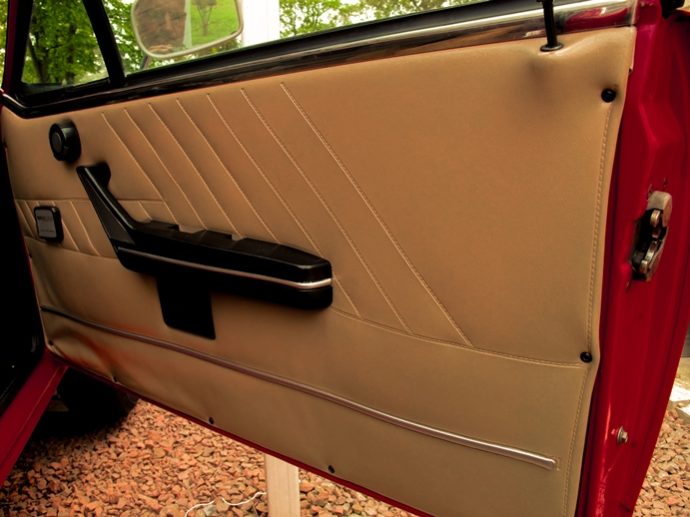 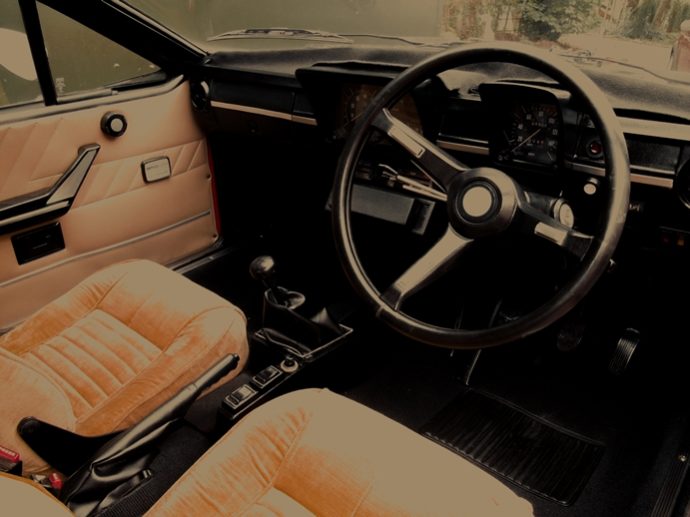 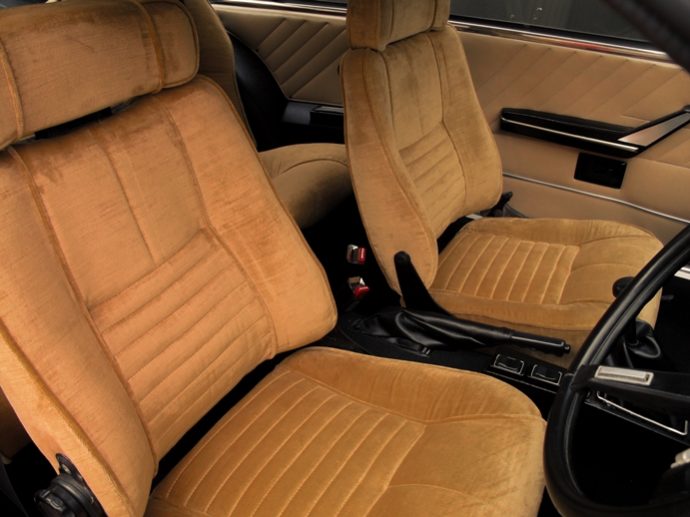 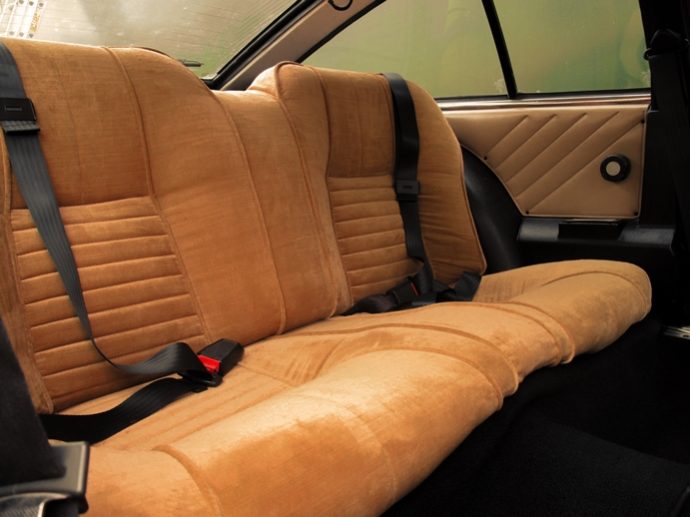 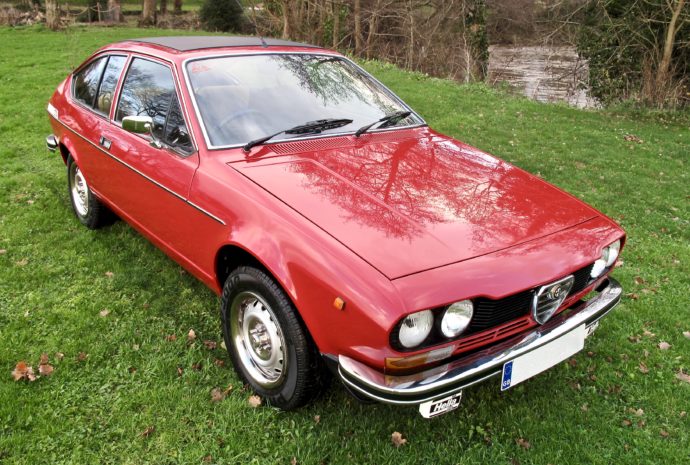 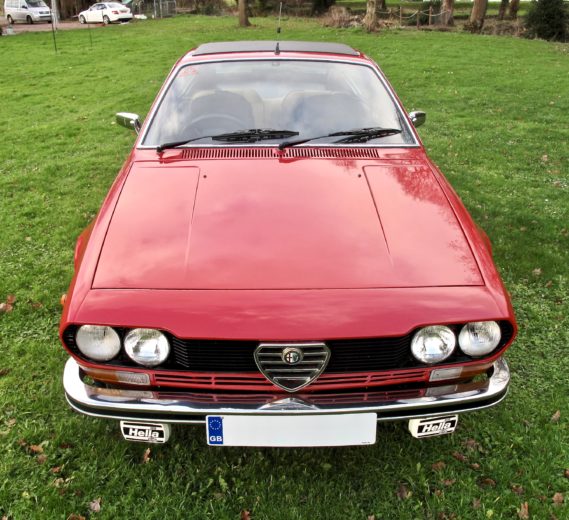 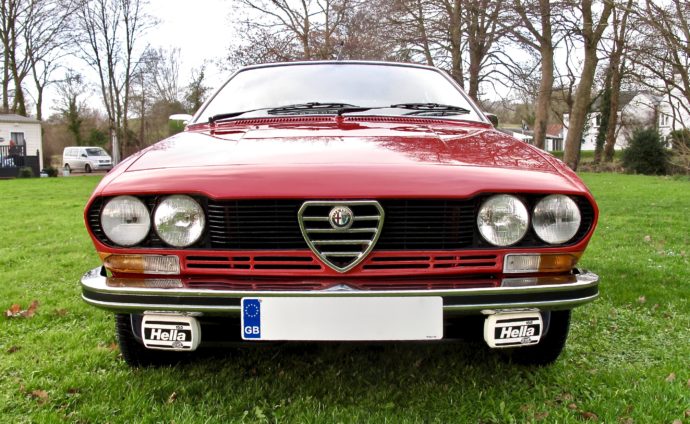 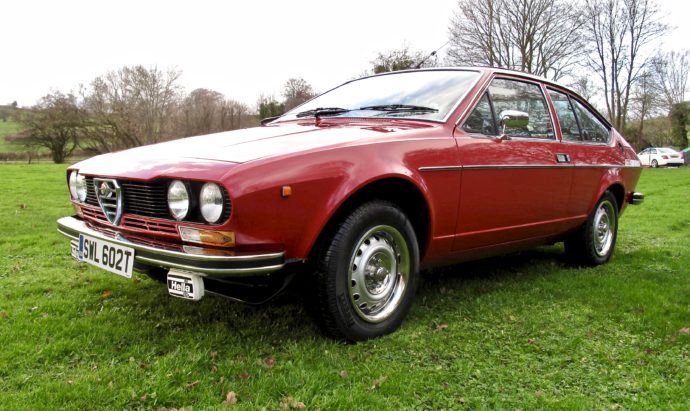 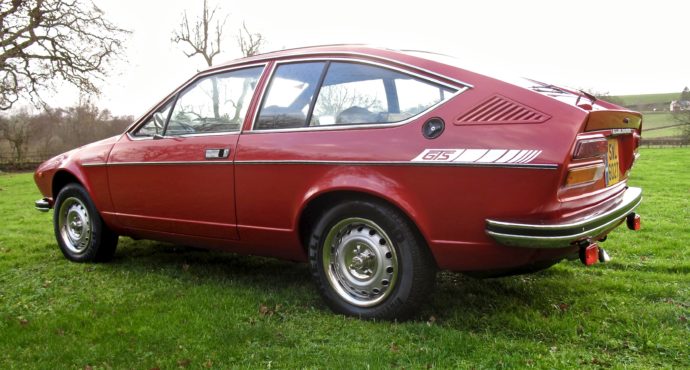 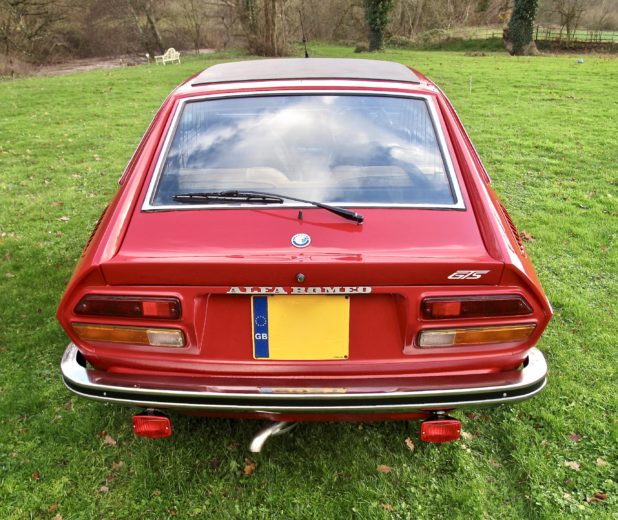 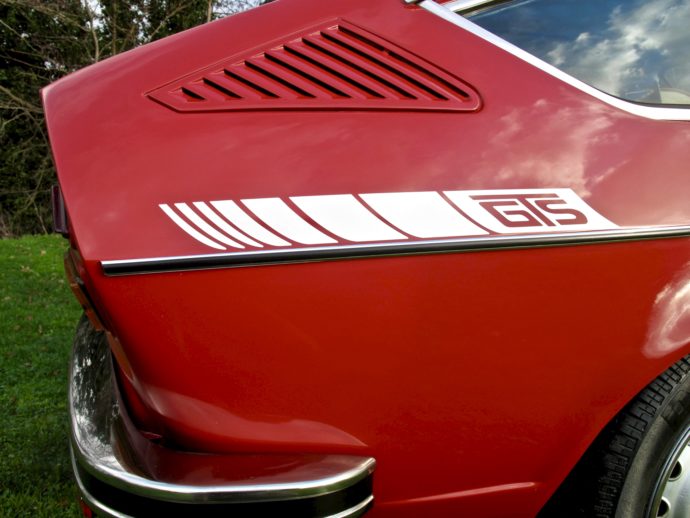 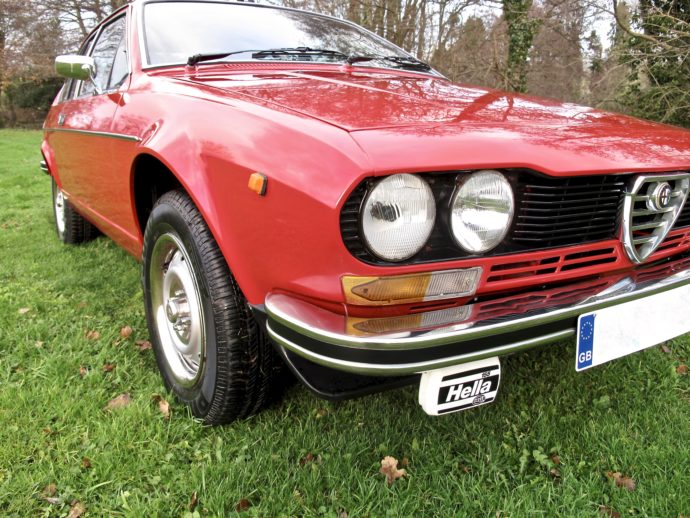 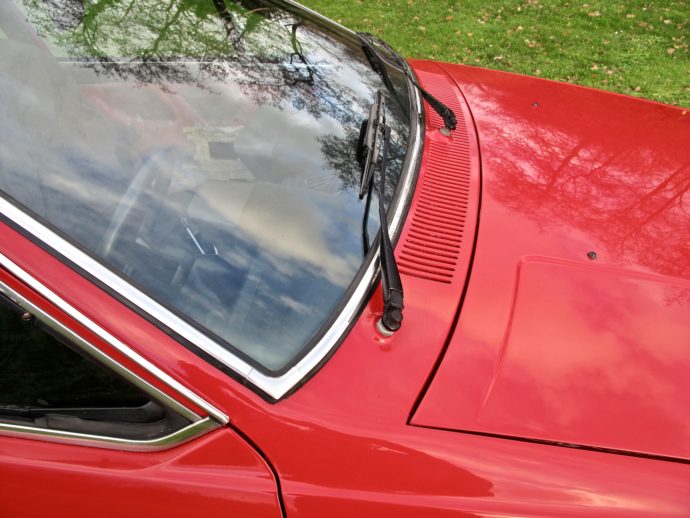 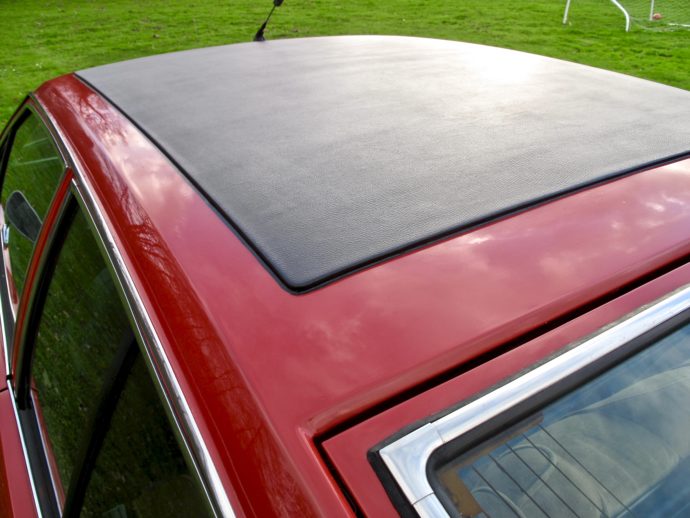 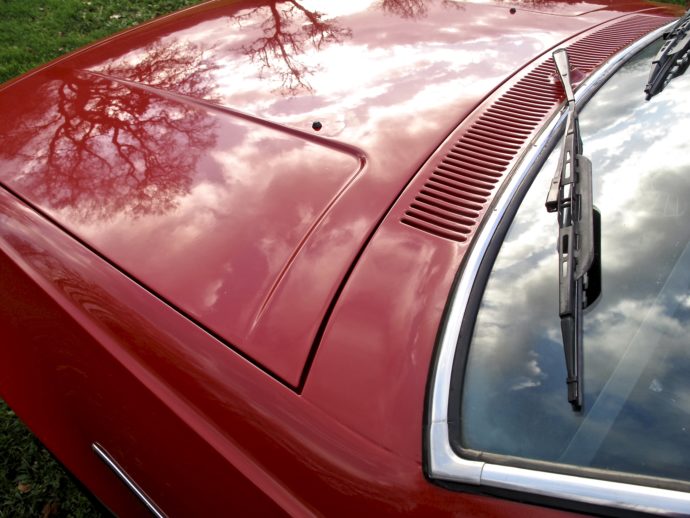